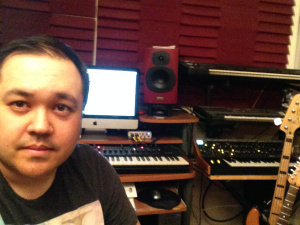 Tonite Records founder Peter Hecher recently talked to Vehlinggo about the founding of the label — and sister label Lunar Boogie — along with how he met FM Attack and his connection to fellow Canadian retrosynther Miami Nights 1984. Of course, he also addressed the question at the forefront of everyone’s minds: What’s next?

I’ve long been fascinated by Tonite Records, sister label Lunar Boogie, and the individual artists in either organization.

I fondly remember the opening synthesizers on 2010’s Astrowave EP, released five years ago on Tonite by Shawn “FM Attack” Ward. Label founder Peter Hecher’s solo project, PH Groove, has put out some great work, such as last year’s “Arcade Feel.” And, of course, there is FM Attack’s masterpiece album Deja Vu, which is…

Welcome to The Synthesizer Book Blog. Come on in. Have a seat and lets explore synthesizer goodness here, there and everywhere.